Sospel and its region, juxtaposed, as it is, to one of the wildest and most stunning of Europe’s natural parks. The Mercantour, and the Castillon Natura 2000 site, boast a fascinating mix of species and habitats. For a naturalist and ecologist, it is a paradise. I have written, and continue to write, items on a number of natural history topics relating to this area, mostly published in the Worcestershire Naturalists’ Club’s Transactions (www.wnc.org.uk) many of whose members visit France and enjoy reading about Mediterranean alps habitats. UK ecologists also tell me it is helpful and interesting to see how others in Europe manage their reserves and promote biodiversity: we can all learn from each other in these times when our wildlife is under so much pressure. 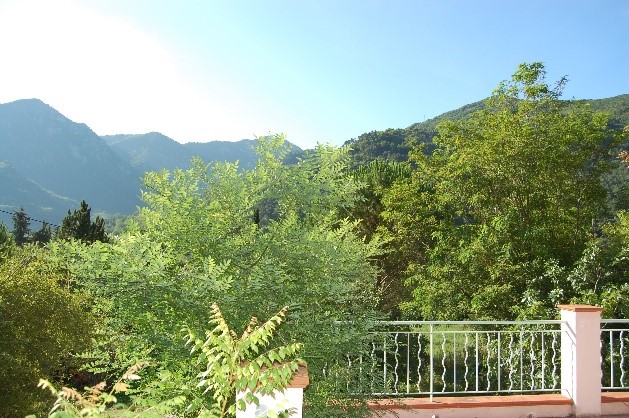 The field station office looks out over the Maritime Alps at the southern border of the Mercantour National Park. As one of the few remaining wilderness areas in Western Europe, so we are fortunate indeed to be on its edge.

The Park now has a formal Charter and Unesco World Heritage Site status. The wider area of exceptional biodiversity extends from the high Alps down to Mediterranean sea trenches, a difference in elevation of 6,000 metres over less than 40 km. The heritage site embraces four natural parks, an Italian province, and a botanical garden, in all covering some 130,000 hectares. The area belongs to the 238 World Wildlife Fund “Ecoregions”.

There is no doubt that the region is extraordinary, with almost every ecological variation imaginable packed into its mountains, valleys and coast. The area boasts some 2000 plant species of which forty are endemic. There are 150 species of wild orchid in France and sixty-thee of these occur in the Mercantour Park.

Then there are six large ungulates – chamois, ibex, mouflon, red deer, roe deer and wild boar. There are wolves in the Park, shy, hard to see and unpopular with the shepherds, but strictly protected – and there’s a long list of smaller mammals including marmot, mountain hare, red squirrel, snow vole, some twenty-eight species of bat, stone marten, edible dormouse and the lérot, another glirid sometimes called the “garden dormouse” but with a black stripy face and big ears. Sixty of the 101 mammals on the French list occur in the Mercantour Park.

As you can imagine, the avifauna is spectacular, enough to make even the most well-travelled ornithologist’s mouth water, with a list of at least 155 species. Counted amongst the Mercantour’s more notable birds are golden and short-toed eagles, bearded vulture (illustrated), Tengmalm’s, scops, eagle and pygmy owls, rock partridge, hoopoe, nutcracker, citril finch, snowfinch, rock thrush, wallcreeper and black woodpecker. Among the denizens of the Park’s many lakes, rivers and streams which also teem with trout, are Arctic char, souffia and Mediterranean barbel. Amongst the twenty-five species of herpetofauna, we have the Mediterranean tree frog, fire salamander, Strinati’s cave salamander, Moorish gecko, three-toed skink and eight species of snake. The alpine newt Ichthyosaura alpestris, though, has not been seen in its upland lake habitat for fifty years and is to be the subject of a re-introduction programme. 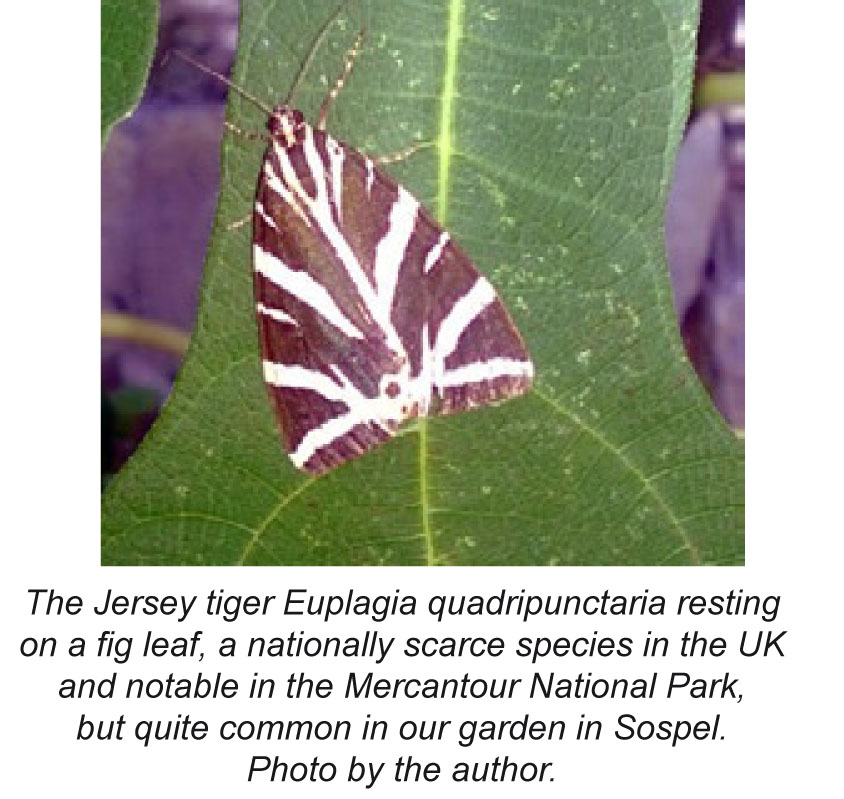 Of course, the entomology in such an area of varied habitats and micro-climates is also extraordinary. The latest “bioblitz” by entomologists added 1353 new species to the 10,000 or so already recorded and certainly there remain many still to be discovered. Non-specialist visitors often remark upon the fireflies, cicadas, the ubiquitous ants, wolf spiders, the giant peacock moth, the wealth of butterflies, and of course, with rather less enthusiasm, the mosquitos! Uncommon invertebrates found here include the butterflies Papilio alexanor (southern swallowtail) and Parnassius phoebus (small apollo), and the day-flying moth Callimorpha [= Euplagia] quadripunctaria (Jersey tiger) (illustrated). Notable beetles include Carabus solieri, and Haptoderus nicaensis. 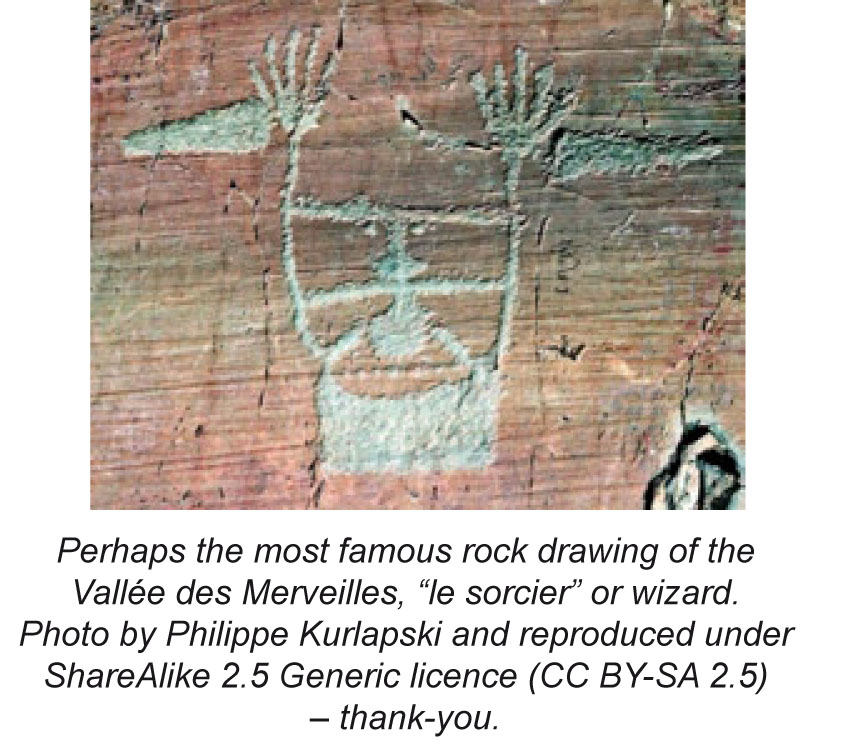 The natural history of Homo sapiens in the Mercantour is also remarkable. The prehistoric open-air rock drawings of the Vallée des Merveilles is one of the largest known such sites extending to 12km2 around Mont Bégo where 30,000 engravings have been found, dating from the Bronze Age 1500 to 1800 years ago. These (one of the most famous illustrated here) and their history are delightfully interpreted by the new Museum at Tende (www.museedesmerveilles.com/).