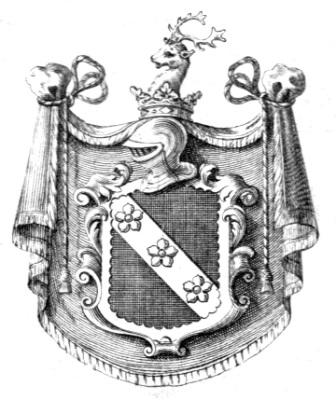 It is over two and a half centuries, and ten generations, since the Betts family started in business - and there has been an environmental theme running right down all those years, although not quite as we would interpret it today. That theme has two principal threads, minerals and biology, and they survive to the present day.

We should like to share a précis of the story with you and hope you find these pages interesting.

We will add relevant new material as and when we can.  Please come back whenever you have time. 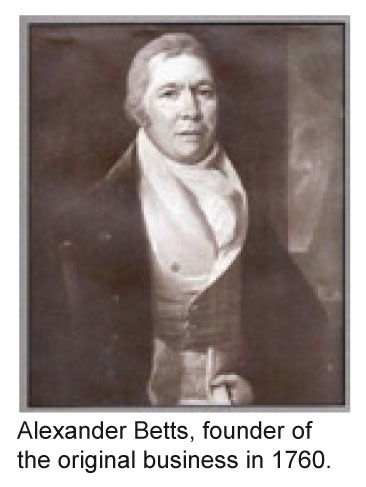 The original business, founded by Alexander Betts, was in refining high value ores and recovering and recycling precious metals.  Details are scant, but early historical references all give 1760 as the foundation date in the inner city Birmingham suburb of Hockley, an area where jewellery manufacturing and related businesses were becoming established at the dawn of the Industrial Revolution.   Indeed, this was the beginning of the world famous Birmingham Jewellery Quarter. (The Birmingham Assay Office was founded in 1773.)

Alexander was from Battle, in Sussex, and died in 1781.  The business was continued in Birmingham by Alexander’s son, Edward, whose profession is listed in his will as a plater. He died in 1817 and is buried in St Paul’s Churchyard off Charlotte Street, between the city centre and the Jewellery Quarter.

There are records of land in Mary Ann Street in the Birmingham Jewellery Quarter at this time, assigned to Edward’s sons, John Betts (1774-1864) (born in Sheffield on 30 December, came to Birmingham in 1785 - my great great great grandfather ) and his brother William Betts (1777-1869) who continued the business together.  Their cousin was Robert Kirby, High Sheriff of London.

John was head of the firm in the 1830s and 1840s at a time when, amongst the precious metals, gold was king.  He was also head of what was a prominent Birmingham family and took a keen part in community affairs. (A list of members of a musical society in Birmingham, the Anacreontic Society, dated 1793, contains his name.)  There are contemporary records of his writing to his friend in Australia, Captain John Hepburn, to implore him “to search well the creeks and the hills” of the area of Victoria as he was sure he was “walking over untold treasure every day”.

The Betts were friends with another Birmingham family, the Rudders.  In 1824, one of John’s children, Emma (1802-1883), married Enoch Rudder (1801-1888), an erudite but restless man of many interests.  Amongst his writings, we see the earliest records, not only of environmental invention (Enoch was one of Britain’s first clean air exponents, producing engineering drawings for the reduction of toxic flue gases from foundry furnaces) but also of the family passion for science and natural history: he wrote, for example, of bird life, swarming ants and the dissection of a slow-worm.  Emma and Enoch sailed for Australia with their family on 27 August 1833 on the Princess Victoria out of Liverpool.  On the voyage, Enoch conducted many experiments, writing them up for the Birmingham Philosophical Institution and the London Geographical Society. In Australia, Enoch founded the town of Kempsey in New South Wales and led an intriguingly chequered life, but that is quite another story.  Much of it has been recorded by his great grandson, Major Lionel Rudder, and published (1986) by the Kempsey Shire Council. (See also 1849 below.) 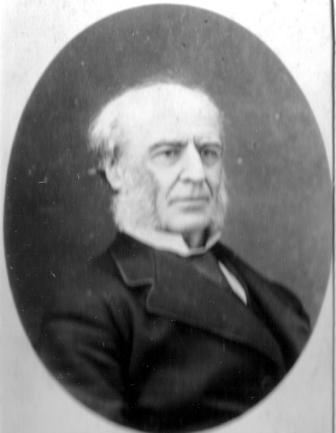 In 1818 Louis de Koehler (1799-1871) (above) was granted his medical licence from the University of France.  This famous doctor was the first to use heated electrical wire in surgery. His daughter, Frances, married Hyla Holden and Annabella Betts’ son (another John) – see below. 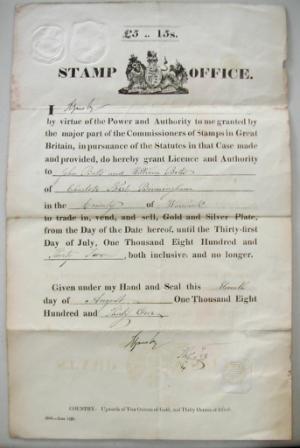 1838. On 1 April 1838, Birmingham received its Charter of Incorporation.  The first Council consisted of a Mayor, sixteen Aldermen, and forty-eight Councillors.  The Aldermen were elected by the Council at its first meeting and included John Betts.

1839. My great great aunt, Rebecca Rudder, sister of my great grandmother Annabella Betts (née Rudder),  set sail with her mother, and other members of the family for Sydney, Australia from Portsmouth aboard the 687 ton Clipper Wilmot built in Nova Scotia in 1836.  Like her brother, Enoch, Rebecca kept a diary and I have her handwritten record of the whole journey. It makes fascinating reading and catches the flavour of contemporary Victorian attitudes to long-distance travel and life at sea (she arrived in Sydney on 26 January 1840).  Rebecca had to go with her family where circumstances, rather than her own volition, dictated.

Rebecca describes many scenes and events of interest to us today, amongst those observations relating to natural history are some on the Portuguese man-o-war jellyfish (Physalia physalis L.), bioluminescence, tuna (probably Katsuwonus pelamys Kishinouye), a tarantula (I suspect Aphonopelma sp.), a parhelion, a cachalot (sperm whale), and - pace Sir David - albatross pie.  In our 21st century world of satellite navigation, routine long-haul air travel, information technology and applied environmental science, it is easy to forget how recently, how quickly and how fundamentally our lives have changed.

1849. With his interest in gold mining, Enoch Rudder also travelled to California, of which journey he kept a fascinating journal.  He colourfully records notes on the people, the natural history, geology, mining practices, agriculture and much else.  He was in San Francisco at the end of April at the outbreak of the great fire which he describes, “I found the Heart of the City in one mass of Flame. It was a grand and brilliant spectacle even amid the full light of day.  The bustle, confusion & Noise occasioned by the falling of Houses, explosion of Gun Powder, rattling of Waggons [sic] to remove furniture &c &c rendered the scene one of no ordinary interest... So rapid was the progress of the Fire that in about three hours from its commencement it had terminated and not less than 2 Million Dollars Worth of Property [had been] destroyed together with several lives.” 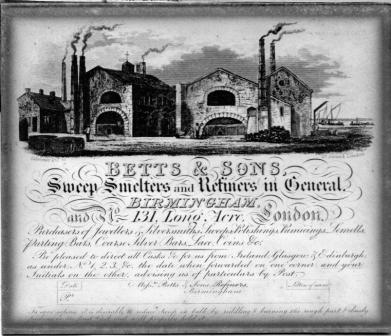 1861. John Betts carried on business as a refiner at Charlotte Street in Birmingham and 131 Long Acre in London (noted on the engraving at left).  On 29 July 1861 at the age of 86, three years before his death, John made the business over in its entirety to his son, Hyla Holden Betts (1800-1872). John placed the business in the hands of a manager (a Mr Horn).

On 16 June 1874, John and Alfred Betts acquired from the estate of Archibald Campbell Barclay Esquire “all that building known as the Catholic Apostolic Church forming the corner of Newhall Street and Charlotte Street” and its attached land for £2,050 (getting on for £127,000 today).  The site was to have expanded the Charlotte Street refinery premises but apparently a fraud involving the money transfer left The Assay Office with the land, an allegedly very rich fleeing lawyer and John and Alfred without either the land or the money.

Letterheads of this time (1874/5) describe the business as “Sweep Smelters and Refiners in General”, indicating the increasing importance of high value metal recovery and recycling.  Materials for precious metals recovery and refining came mostly from the jewellery trade in Birmingham and London, but also from all kinds of industries using precious metals (potters, platers, mirror manufacturers, etc.) and ore was even shipped in casks from Australia to be refined.  There are several bills of lading for casks from Sydney Royal Mint shown in our records for this time. 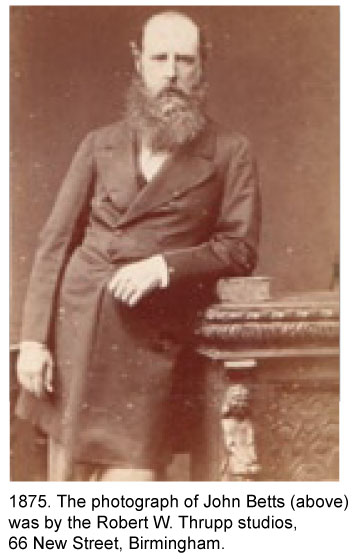 1880. In a letter dated 8 March, Alfred Betts states that he cannot continue to conduct the business of Betts & Sons, 64 Charlotte Street, Birmingham, and asks John Betts if he will continue alone.  John Betts, interestingly, declines.  The reason is not clear. 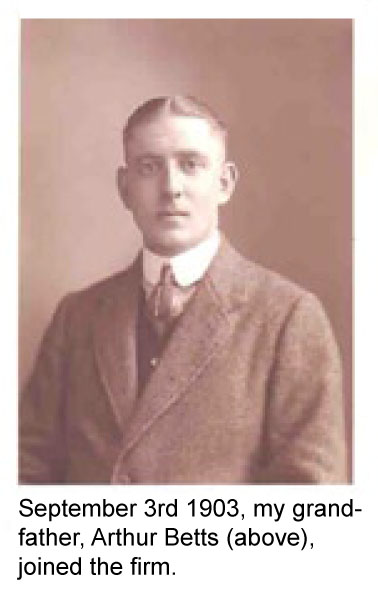 Additional premises in Vittoria Street in the Birmingham Jewellery Quarter were bought in 1921, but a difficult period of business followed until 1929 when at last the company was able to pay its shareholders a dividend again.

It was not to last: war broke out in 1939, followed by a general strike and the Great Depression.

Exactly thirty years to the day after his father, my father, John Francis Betts had joined the firm on 3 September 1933. Those first difficult years in his professional career became rapidly worse when he joined the army: he was shot when leading his men at Dunkerque, and captured, spending the rest of the war as a prisoner.

In 1945 my aunt, Peggy Betts, joined the company to run the London Office, firstly in Eagle Street (sold in 1960), and then Kirby Street in Hatton Garden.

In 1946, my father was released and returned to England to take up running the business with his father.

The post 1945 war years were hard on almost everyone.  The Betts factory had not shut down as its furnaces and services were needed for the war effort, but making any kind of income to support a family was tough indeed. 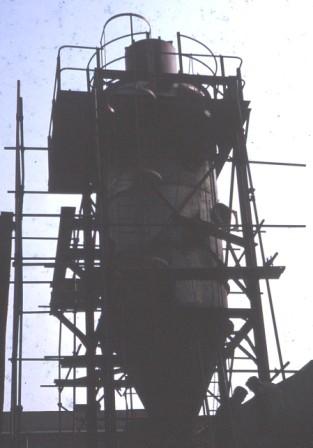 1952. Arthur Betts died after a lorry backing into the factory gates crushed him against a wall. It was not the driver’s fault .

In 1954 the coal and coke that had powered the factory for so long was replaced by oil.  The smelters were fitted with electrostatic precipitators to control particulates (left).

The hard work put in by my father revived the firm’s fortunes so that the celebrations of the company’s Bicentenary in 1960 were well deserved. An era of innovation and a new technological revolution had begun.

During all this time, the Betts family had retained its great interest in the natural world, my parents being founder members, with Christopher Cadbury and others, of the Worcestershire Nature Conservation Trust as it was then called, spurred on by the personal contact the founders had with luminaries such as Sir David Attenborough.

1963. I started work at the family firm (still John Betts & Sons Ltd at that time) as the eighth generation there.  Modernisation of Birmingham was continuing apace but we were still using avoirdupois weights (and troy ounces for the precious metals).  I introduced metrication, much to the horror of the traditional workforce! Installation of modern analytical and foundry technology, and environmental equipment, followed.

The 1960s had seen the construction of the GPO tower in Newhall Street behind our factory. Once it was occupied, it was the beginning of the end for us in central Birmingham which had become a city of “white collar” professionals.  We moved to a new factory in Oldbury which I ran until taking over our overseas work in 1975.  Unfortunately, we were not immune to the problems which beset so many small family businesses in the UK, the high taxes and the asset strippers.  My brother was able to salvage something from the ashes and, with the goodwill of our old clients, managed to rebuild a refinery and precious metals business that thrives today in the Birmingham Jewellery Quarter.  I remained interested in the environment and formalised my self-taught interests by reading ecology, biology, environmental science, planning and land-use with the CNAA at what is now Worcester University.  Hence the businesses we have today.

Information technology and the advances of modern science have transformed, and continue to transform, the world.

The Betts family businesses are at the cutting edge of their specialized fields.  The year 2010 saw the 250th anniversary of our commercial beginnings. We are all proud of that, but we remember the old saw:

A trader places a sign outside his showroom reading, “J Smith & Co, founded 1700”.

His neighbour promptly erects his own sign: “A Jones Ltd, founded last month - no old stock!”

In the years since 2010, there has been plenty of activity.

My brother Stephen and my nephew Dan have built a gold mine in West Africa - see  "www.hummingbirdresources.co.uk/"  and funded a project to protect the pygmy hippo. Stephen was appointed High Sheriff of Worcestershire for 2017/8 and at Betts we have expanded our Estates business to own and manage urban greenspace in many parts of the UK. And so, as my daughter Natalie takes over from Cecilia and me ... on into the future. 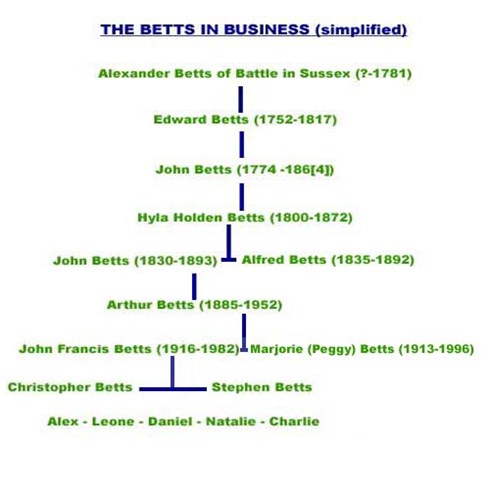